The latest development from within Constructive Media has finally been unveiled to the general public. After years of research and dedication, we are proud to bring to the world "Contact3" – a solution that will surpass all previously attempted solutions for allowing the human eye to perceive 3D visuals. 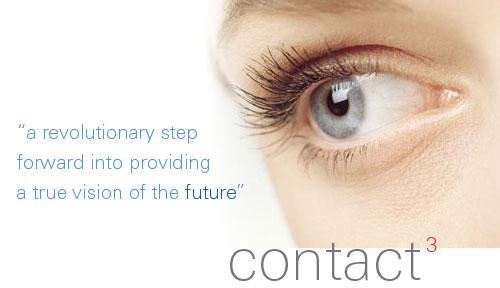 Regular computer-generated 3D visuals of future-based products have involved a tedious modelling process, which is then followed up by hours of painstaking lighting and materials allocation, and finally rendered out to produce visuals either in electronic or paper-based format.

That was the past. We have invented the future. This is Contact3.

Contact3 is a contact lens-based system that is actually an organic processor and direct eye display (DED) unit. Before the contact lens is placed onto the eye, it is wired up to a computer that loads a predetermined set of co-ordinates and visuals into the organic processor. When the user visits the right location on the earth’s surface (calculated using GPS co-ordinates), the lens automatically readjusts the users vision to incorporate the computer-generated image, superimposing this onto what the user is actually seeing.

As the user moves, the computer-generated image scales and resizes proportionally, giving the true illusion of a future product in place of an existing product.

This revolutionary new product has gathered interest from surgeons, property developers, shareholders and clairvoyants – all people seeking to find ways to directly visualise the future.